Sarah Gets Gutsy: The First of Many Adventures 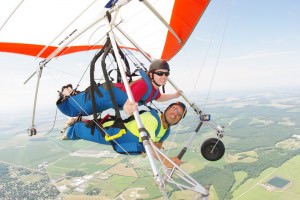 Say hello to today’s guest blogger, Sarah Hutton, as she shares her story of how she’s getting gutsy.

I have been skydiving, rock climbing, hang gliding, caving, and cage diving with great white sharks. I’ve been whitewater rafting four times, including once on a river that is widely considered to be among the top 10 rivers in the world. I have been on a safari in Namibia. I’ve hiked up Table Mountain in South Africa and repelled back down it. I climbed the Great Wall of China. I rode a camel in Morocco and an elephant in Thailand. I visited the North Korean/South Korean border.

To say I’ve “gotten gutsy” a couple times in my life would be an understatement; I have done more “gutsy” things by the age of 23 than many people do in their entire lives.

But, my life wasn’t always this way; I did not always have the confidence to seek adventure.

When I was 18 years old and about to graduate high school, a group of people (who for the most part I would have considered acquaintances at best) were going on a three-day whitewater rafting and camping trip as a graduation celebration. When one of their group members backed out, one of them asked me if I wanted to come along.

I was surprised to hear myself saying no as I had actually wanted to try whitewater rafting for a while. But, I didn’t think I would be good at it and I thought I would bring the group down. While I played sports in high school recreationally, I by no means considered myself athletic and I did not foresee having the endurance to last on a three day rafting and camping trip. I didn’t want to embarrass myself in front of people I barely knew.

My friend finally wore me down. He told me you didn’t have to be “good” at it, and that the guides would teach us what to do. After a lot of convincing, I agreed. I had to admit I was intrigued by this group of people who would choose a rafting and camping weekend as a graduation trip over the typical, drunken “senior week” at the beach.

Those three days were some of the most fun I have had in my entire life, and they sparked an interest in adventure and trying new things that has given me most (if not all) of my favorite memories of the past five years.

I am not saying that everyone has to be an adrenaline junkie or a travel fiend to enjoy life. What I AM saying is that you have to try new things even if you are scared. It is only through trying new things that we can find our true passions. There is a clichÃ© that goes something like “If you always do what you have always done, you’ll always get what you’ve always gotten” and as trite as the phrase may be, there is truth to it.

Try new restaurants in nearby cities that you have never explored. Take an art class. Set a fitness goal.  Rent a high-quality camera and experiment with photography, just for a day. Submit a piece of writing to a contest. Do something, anything. I have personally done all of these things over the past few years and I have enjoyed some of them more than others, but all of them have truly made me a better person.

I challenge all readers to try something new by the end of 2012, and to leave your stories in the comments section.  Big or small, if it is something new to you, it is important in your life.

Sarah Hutton got her bachelor’s degree in strategic communication from Temple University in 2010 and is now halfway through a master’s in global and international education from Drexel University. She was part of a development team for a nonprofit in Wilmington, DE for most of 2012 but has recently transitioned into a more education-related role at the same nonprofit. Two of her biggest passions are travel and trying new, adventurous things, and she loves trying to convince other people to “get gutsy.”

How are YOU getting gutsy? Whether you realize it or not, you probably are getting gutsy in both large and small ways, every day. Want to share your story with others looking to make big moves towards a happier life? Just drop me a line. Your post could appear here on the blog as part of the “Get Gutsy” series.