Behind the Scenes at America’s #1 Haunted House: Eastern State Penitentiary’s “Terror Behind The Walls” 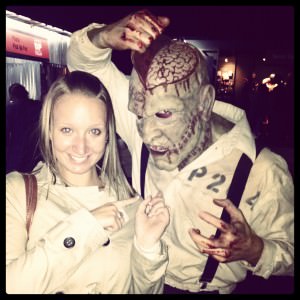 Take the girl who hates scary movies, refuses to go through haunted houses and gets startled at the drop of a pin and put her in the middle of America’s #1 Haunted House. I’m sure you can guess what happens.

The last time I went to Eastern State Penitentiary’s famous Terror Behind the Walls, I left crying. Granted, I was 17 years old, but still. It was a harrowing experience. So last night when I had the unique opportunity to go “behind the bars” at Terror Behind the Walls with the Philadelphia Public Relations Association (PPRA), a PR organization I’m a part of, I was just a tad nervous.

I’m happy to report I made it out alive! But let’s go back to the beginning.

According to their website, Eastern State Penitentiary is America’s most historic prison and was once home to the likes of prisoners Al Capone and “Slick Willie” Sutton. You can tour the famous prison throughout the year, but during the Halloween season, part of the Penitentiary is transformed into a terrifying haunted house called Terror Behind the Walls.

Nearly twenty brave PR professionals from PPRA chose to test their fear with an exclusive behind-the-scenes tour and cocktail hour in famous Cell Block 7. The Eastern State Penitentiary team pulled out all the stops to make this tour a truly VIP experience.

We were broken into two groups and immediately taken to the front of the line for access into the Haunted House. And from there, we entered Terror Behind the Walls…

If you’re wondering if Terror Behind the Walls is actually scary, the answer is YES! From scary monsters jumping out at you from every which way, to a psychedelic zone with 3-D glasses to the complete darkness of many of the areas of the Haunted House, you will most definitely be scared as you travel throughout the prison.

Terror Behind the Walls is broken into different “Zones” or areas of the Penitentiary, meaning that after you go through one scary bit, you get a few minutes reprieve before heading into the next one. I was EXTREMELY thankful for the chance to breathe between zones.

I was also VERY thankful for my good friend Lindsay, who allowed me to hang on tight to her arm and scream in her ear throughout the 45-minute (YES, 45 long minutes!) experience. Sorry again, Linds!

The coolest part about Terror Behind the Walls is that in the midst of the fake scary stuff- the actors, the props, the eerie music- is a real, underlying sense of true frights. Eastern State Penitentiary is rumored to be haunted and has been featured on paranormal TV shows from MTV’s FEAR to TLC’s America’s Ghost Hunters to the Travel Channel’s Ghost Adventures. Who knows? Maybe I encountered a real spirit during my tour…

After going through Terror Behind the Walls, we had the opportunity to hear from Ellen Feist, Eastern State Penitentiary’s Director of Marketing about what it takes to promote this very famous attraction. Needless to say, this group of PR pros had MANY questions for Ellen including asking how she handles media requests (Hint: they never say no!) to if she’s ever had their very own ghost sighting (Answer: No. Ellen likes to believe her and the spirits have a mutual understanding).

We got a behind-the-scenes look at the green room where the actors hang out on their breaks, and toured the state-of-the-art makeup studio and costume room where 200 actors get ready to scare the more than 100,000 people who visit Terror Behind the Walls a season.

Then we headed to Cell Block 7 for a cocktail reception. Cocktails in a famous and historic haunted prison? Check that off the bucket list!

Last night impressed me for so many reasons:

1. It was clear that every single person working at Eastern State Penitentiary is passionate about their jobs. From Ellen in Marketing to the actors throughout the haunted house to the security guards wishing us a safe night as we left the premises, every single employee had a smile on their face and made it obvious that they enjoy their jobs.

2. Eastern State Penitentiary pulled out all the stops for PPRA. Front-of-the-line access to the haunted house, tours of the green room, makeup and costume area and a cocktail reception in a cell block certainly made for an experience I’ll never forget.

3. Terror Behind the Walls is Eastern State Penitentiary’s major fundraiser; 65% of their annual operating budget comes from the funds brought in from Terror Behind the Walls. And after last night, I definitely want to come back for a tour during the day both to learn more about Eastern State Penitentiary and support an amazing organization preserving the history and culture of an American landmark.

If you’ve never gone to Terror Behind the Walls, I HIGHLY recommend that you plan a trip. Ticket prices range from $20 for a group to $27 for an individual to an incredibly scary ALONE package where daring souls go through the entire Haunted House, completely alone.

What do you think? Are you daring enough to visit Terror Behind the Walls? Have you ever had a ghostly encounter? Share your stories in the comments below!

9 thoughts on “Behind the Scenes at America’s #1 Haunted House: Eastern State Penitentiary’s “Terror Behind The Walls””