Book Review: Other Words For Love by Lorraine Zago Rosenthal 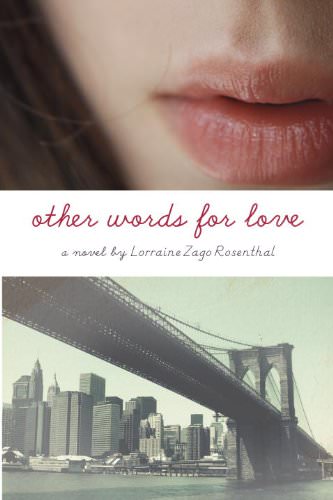 Ari Mitchell is just your average teenager, trying to make her way through high school in Brooklyn. Overshadowed by her beautiful best friend Summer and harboring a secret crush on her sister’s husband Patrick, Ari feels invisible. When Ari’s family inherits money, they decide to send her to en elite prep school in the big city, where her best friend Summer goes to school.

Worried she won’t fit in, Ari is nervous, but excited to begin her new journey in Manhattan. She meets a new friend Leigh, who introduces her to an exciting part of NYC that she previously never knew. Leigh’s family is wealthy, and Ari and Leigh become fast friends attending parties and going for day trips to the Hamptons.

When Leigh introduces Ari to her cousin Blake, Ari falls for him hard and fast. Their relationship is great for a few months, but when things start to go downhill, Ari doesn’t know how to deal. How do you get over the most intense love you’ve ever known?

OTHER WORDS FOR LOVE perfectly captures the emotion that comes along with first love. Towards the end of the book, tears rolled down my face as Ari experienced heartbreak for the very first time. The dialogue brought me back to the end of my first real relationship, and I was struck by how eloquently Zago Rosenthal described Ari’s feelings and actions.

Ari was the perfect main character. If she were real, she would be my best friend. Every girl has felt like Ari at some point in their lives, which is why it was so easy to relate to her throughout the book. I felt for her, living in the shadow of her friend Summer (who I didn’t like very much, by the way) and I rooted for her to find the boyfriend she deserved.

Let’s  talk about setting. I love how the book took place in Brooklyn, as well as glitzy Manhattan. Zago Rosenthal’s description of both cities truly showed how Ari was struggling to figure out where she fit in. Of course, she came from humble roots in Brooklyn, but found herself drawn to the wealthy lifestyle of Leigh and Blake. The gorgeous cover of the book also aptly depicts Ari’s journey from an inexperienced teenager in Brooklyn to a (more) experienced young woman after her intense relationship with Blake.

One of my favorite parts of the book was Ari’s relationships with the various people in her life. While the book started seemingly slow, as I continued reading, I came to appreciate the important back story that Zago Rosenthal provided in lieu of jumping right into the action. Seeing Ari’s interactions with her emotionally struggling sister Evelyn,  her demanding mother and her snobby best friend Summer helped me to better understand Ari as a person, which later helped me to better understand her relationship with Blake, and her subsequent downfall when things didn’t go as planned.

This book took place in the 80’s- something I didn’t realize until halfway through the book. I felt quite silly once I realized, though I should have known because there are  references to AIDS and STD’s, two huge issues in the 80’s and two issues that play a big role in the decisions Ari makes throughout the book.

This is a young adult book that both teenagers (I’d probably recommend it for those 15 and older) and adults will enjoy. The beautiful writing and the honest story will stay with you for a long time after reading this book. Being that this is Lorraine Zago Rosenthal’s debut, I can’t wait to see what she comes up with next!

As part of the OTHER WORDS FOR LOVE blog tour, please stay tuned tomorrow for an interview with author Lorraine Zago Rosenthal, as well as a GIVEAWAY!

Review copy provided by the author.

11 thoughts on “Book Review: Other Words For Love by Lorraine Zago Rosenthal”